This week has been interesting with my two temporary feline roommates.

Noah, Precious and Finn are still locked in the never ending battle of, “I hate you.. oh but wait, I’m curious about you.” and “hey, why are you in my house, go away.”

Noah is showing some definite signs of being the dominant feline and they’re all trying to figure out how they fit together in the house. Noah is only locked up in the foster room at night so that they can all take a breather. He’s pretty much exclusively using the same litter box that my two use. (Side note: three cats using the same litter box means I practically have to clean it twice a day. There’s 3 boxes available to them and they all use the same one -.-) He’s also eating out of their food dish. Wish, on one hand is a good indication that he’s comfortable, on the other… it also means he’s eating the expensive Urinary SO food which makes my wallet cringe.

He’s off his anti-inflammatories which also means… He is officially up for adoption! My little Noah is going to find his forever home soon and I couldn’t be happier! 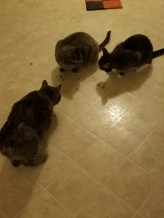 Pixel is doing good as well! On Friday, she went for her spa day. That’s just a nice way of saying she got stabbed with needles multiple times and cut open for a spay.

But it’s all necessary and she’s doing really really well.

For the next three days she is going to be on an oral pain medication and just left to relax while she heals up. Introductions are going to be a little different between her and my two(and maybe Noah) than it was with just my two and Noah.

Pixel is a sassy little thing and doesn’t miss an opportunity to spit, hiss, growl and just show her overall displeasure whenever she even gets a whiff of another cat. I’m hoping that’ll calm down now that she’s spayed, but I don’t know. Calico’s tend to have one hell of an attitude and she certainly has it.

But she’s oh so sweet to humans. Ah well.

It’s not going to take Pixel long to go up for adoption. She’s super friendly, has no behavioral issues, has no medical issues and she tested negative for FeLV and FIV.. she’s going to be adopted very very quickly. She’s still a baby… she needs a good home.

*You’ll notice that I don’t nearly have as many pictures of Pixel as I do for Noah. That’s because she NEVER sits still. The only reason why I got this one is because I took it right after she got home from her spay.

If you have any questions about these two or fostering in general, let me know!