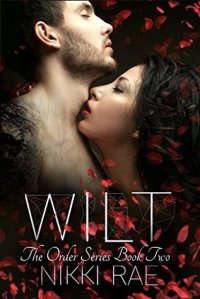 When she was sold to Master Elliot Lyon of House Chimera, Fawn could have never imagined he was the same person as Elliot, the man beneath a well placed mask. A victim. Just like her. She would have never thought he was grooming her for the Wolf she’d already escaped once. That he planned to deliver her to the beast’s jaws in exchange for his wife. Master Jäger will stop at nothing to have her—even if that means using others as collateral. With more than just their lives on the line, Fawn must become someone else, and Master Lyon distances himself further from Elliot as her transfer looms.
The roots of the Order run deep within them, but Fawn is beginning to realize another bond has formed between her and her Owner, a man she vowed to destroy along with the rest of their tangled branches.
In a world where trust is just a tool and love isn’t meant for people like them, Fawn is determined to beat the powerful at their own elaborate games of make-believe. Even the man who Owns her.

*I received a copy of this book for free from the author in exchange for an honest review.

Have you ever read a book by this author before?
I read Bloom earlier in June

Who would you recommend this for?
Anyone who enjoys dark romances. Other people may not be able to stomach it.

I had two thoughts when I finished this novel:

One: Holy shit that was fucked.

And Two: I want more.

I’m so invested in this story and these characters that I honestly can’t wait to read the third book. Sure, it’s not a fluffy, feel good romance but these characters feel so real and are so well rounded that I want to know what happens to them. And not just in a “this is a train wreck and I can’t stop watching” way because you know shit is going to hit the god damn fan and everything is going to hell.

I can’t wait to see if there’s going to be a shift in Elliot and Fawn’s relationship. And how that’s going to happen. Is she still Owned? Will she still be treated in such a dehumanizing way? And what about Elliot’s wife? How is that all going to work?

I have questions, Nikki!

2 thoughts on “Wilt by Nikki Rae”