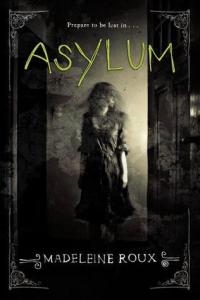 Asylum is a thrilling and creepy photo-novel perfect for fans of the New York Times bestseller Miss Peregrine’s Home for Peculiar Children.

For sixteen-year-old Dan Crawford, New Hampshire College Prep is more than a summer program—it’s a lifeline. An outcast at his high school, Dan is excited to finally make some friends in his last summer before college. But when he arrives at the program, Dan learns that his dorm for the summer used to be a sanatorium, more commonly known as an asylum. And not just any asylum—a last resort for the criminally insane.

As Dan and his new friends, Abby and Jordan, explore the hidden recesses of their creepy summer home, they soon discover it’s no coincidence that the three of them ended up here. Because the asylum holds the key to a terrifying past. And there are some secrets that refuse to stay buried.

Featuring found photos of unsettling history and real abandoned asylums and filled with chilling mystery and page-turning suspense, Madeleine Roux’s teen debut, Asylum, is a horror story that treads the line between genius and insanity.

Have you ever read a book by this author before?
No

If it’s a series, would you continue reading it?
No way.

Who would you recommend this for?
People who don’t mind being creeped out by things.

This book was definitely not for me. Like at all.

I can usually handle pictures of old sanitariums and such and just find it interesting, but this ended up being extremely creepy. The pictures were obviously a fantastic contribution to the story and added to the atmosphere of the novel. It just happened to be an atmosphere that I hated.

This almost reminded me of Mara Dyer a bit. The first couple books at least. A very unreliable narrator who you can’t quite figure out if they’re insane or if paranormal things are really happening to them.

I was considering reading book two and then realized that it uses images from old carnivals. No thank you. I draw the damn line at clowns.

1 thought on “🎃Asylum by Madeleine Roux”