I announced on Twitter and Insta that I got two new pets.

Everyone seemed pretty confused about what they are and that they even exist, so i thought I’d do a little post about them.

Meet Mudkip and Wooper the Axolotls. Axolotls are a type of salamander, also known as a Mexican Walking Fish. They absolutely adorable, ranging in colors from white to speckled brown and basically everything in between. They have red gills on each side of their face. They kind of remind me of those dinosaurs… but cute.

They’re very much endangered, due to their habitats being destroyed and large fish that eat them being introduced, but their thriving in captivity.

These are very laid back pets that don’t actually require a whole lot of care. They eat anywheres from once a day to once every 3-4 days depending on their ages. Mine are babies that need to be fattened up, so I’m currently feeding them twice a day. They eat salmon pellets or earth worms. They also love uncooked shrimp.

The only thing really particular is the aquarium. They don’t like running water, so a weak filter is best. They prefer low light environments, so you don’t need an aquarium with a bright fluorescent light. They also love a lot of space. These little guys are very similar to Koi fish. The bigger their environment and the more space they have, the bigger they’ll get. I have 2 babies (about 5 inches long) in a 20 gallon tank. But they’ll be upgraded to a 30 gallon as they get older.

They also can’t have pebbles or decorations smaller than their heads. They have big mouths and they can be a little stupid sometimes and try to eat anything they can get their mouths on. So sand is the best thing to have at the bottom of their tanks.

The best thing is, you don’t have to do full water changes. It’s actually really bad if you do because they need a certain bacteria in their water that you would destroy. So 15-20% water changes every week or so and making sure to scoop out any food or debris every day.

Axolotls are permanently in their larvae stage. So think of them as tadpoles that never become frogs. The most interesting thing I find about them is (although it means that their water conditions are not ideal) they can actually become land dwelling. They start to lose their gills, grow eyelids and want to be on land. At that point their very similar to mole salamanders. But I need to stress that this is bad. Anyone who tries to force this change will 99% of the time kill their Axolotls.

I can’t wait until we can get their entire tank set up. They’re happy though… at least they seem happy to me. 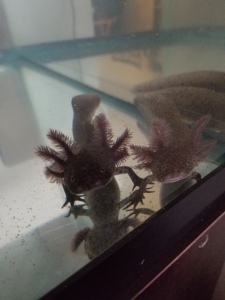 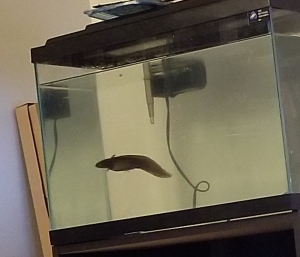 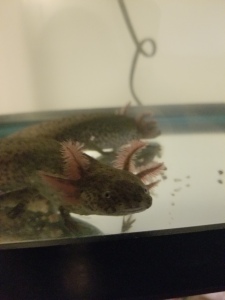 If you have any questions, let me know below and I will try to answer them to the best of my ability. I’m still learning.