It’s been so long since I’ve given any sort of update regarding fostering. Even before my hiatus from blogging. So here it is: 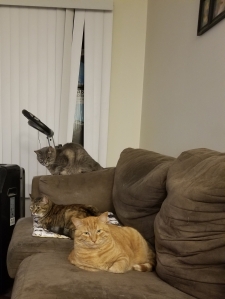 George and Ruby are official adopted! By me. My husband and I decided that George and Ruby are very much a part of our family and they will stay with us for good. Since we officially adopted them, they have come out of their shell even more and are the most loving, sweet cats ever.

During the time that we made the decision to officially adopt them, the rescue I foster for was working on clearing out a colony of cats outside of town. This colony was in seriously rough shape. There were more females than males, so most of the cats came in pregnant. There were many litters of kittens and many cats that were seriously sick. This is when I got Evangeline. Evangeline was the tiniest little kitten with a huge heart. Regardless of the mistreatment she experienced, she absolutely loved humans and wanted nothing more than to cuddle and play. 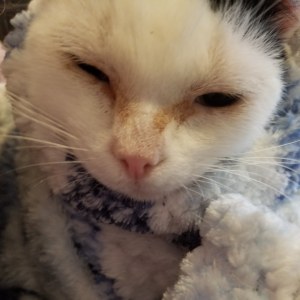 All of the cats from the colony were tested for Feline Leukemia and all but a couple came back with a negative result. This was obviously fantastic news, but it also meant that the cats who tested negative needed to be retested after five weeks. Evangeline was one of them.

She was pretty sick. She had an upper respiratory infection that wasn’t easily kicked, a tummy issue that needed more antibiotics to treat. The worse and most concerning symptom was the sores popping up on her hind legs.

And then she was retested and I’m sure you can gather what the results were.

I was heartbroken. This poor little kitten who wanted nothing but love had to be euthanized because the humans in her life didn’t make the simple choice to get other cats vaccinated. Now I know I’ll have a few people saying “Well, cats can live a fine life with a diagnosis of Feline Leukemia.” and they’re not wrong… kinda. MOST cats can live a long healthy life with Feline Leukemia. Evangeline was not most cats. She was emaciated, she had a litter of kittens while she was super sick, she had infections that wouldn’t heal. It would have been cruel to make her fight such a hard battle. 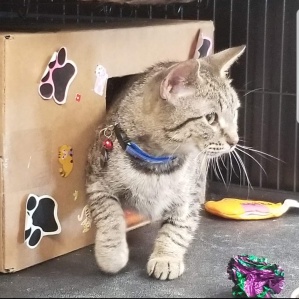 We briefly had another cat in with Evangeline. Her name was Amara. She was from the same colony as Evangeline and was such a sweet cat. She loved human attention, loved being picked up and cuddled. She didn’t get along with Evangeline and was being pushed away from the litter and food dishes by Evangeline. (Food aggression is typical in these colony cats.) So Amara was sent to another foster before being fostered by a pet store in my city where she was adopted after less than a week ❤

After Evangeline, my foster room needed to be bleached top to bottom, supplies needed to be replaced and the room was quarantined for eight weeks. That was a tough time. The rescue was completely overrun and I could do nothing to help.

After the eight weeks, I got Osiris. 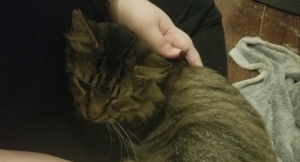 Osiris is… probably one of the worse cases of semi-feral cat I have ever dealt with. The first day here he peed all over me and the window sill because I scared him so much… just by trying to move him a bit to wipe off his tail.

After a few weeks of every day forced cuddles and tempting with treats and wet food.. I have finally gotten headbutts and was allowed to give him belly rubs. He purrs up a storm when I get him into the proper mood, but he still won’t walk around with me in the room. I bought a surveillance camera so I could keep an eye on him without scaring him and I have been able to see how good he is doing and how comfortable he is in the room. He really is the best cat.

He as well was from the same colony as Evangeline and Amara.

Fostering is extremely tough. But I love it.